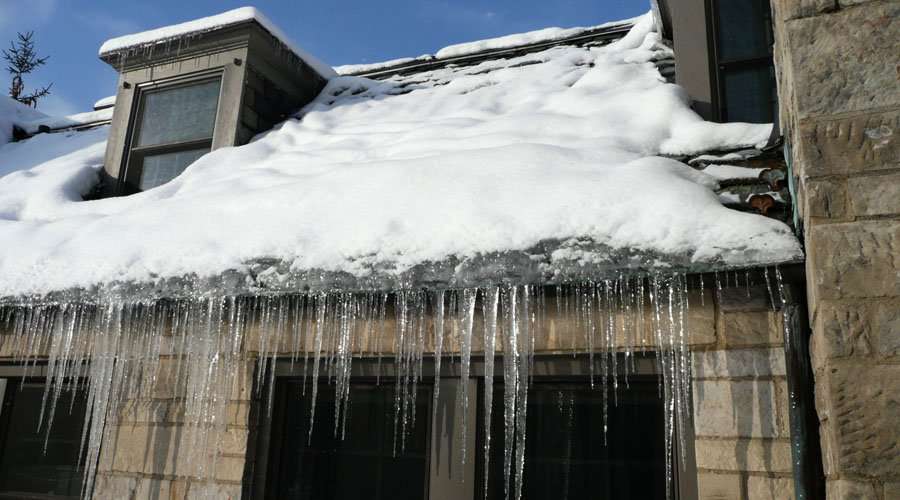 Icicles on roofs are a sign of ice dams

What causes Frost Heave? Preventing frost heaving is down to good foundation…

How to install siding

Are skylights an asset or a liability?

Ice dams form at the bottom of roofs, letting water penetrate and cause damage to the interior of walls and roofs.  When snow melts on a roof it runs down until it meets the unheated bottom edge of a roof and then freezes. This chunk of ice is called an ice dam, and it can cause water to backup beneath shingles and Ice dams cause damage to walls and roof structures.

How to know if you have an Ice dam problem

If you look up and see a big chunk of ice on the bottom edge of your roof, your forensic work is done; you have an ice dam. Despite the romantic image of icicles hanging off a roof in a beautiful Canadian or northern US winter, they are an indication of a problem. A well-made roof should have no icicles whatsoever, just a fluffy pile of snow at the edge.

On the inside of homes you may notice water stains indicating there has been a problem; there might also be mold forming on drywall where the roof and wall meet.

The inside of kitchen cupboards can be a tell-tale sign as well – since the air in kitchens is often more humid and cupboards are closed with little air movement, condensation can form on the walls in the back of cupboards. Whether or not you have indentified an ice damming problem, this is an indication that you have a thermal bridging problem.

As some of these problems (such as snow, sun and wind) are unavoidable, the surefire solution to preventing water damage due to ice damming is to include a waterproof membrane below your final roof covering at the bottom edge of the roof. This membrane will allow any water that does back up beneath the shingles to be safely drained off the roof.

A bottom metal surface is another common practice as this allows any ice that forms to slide right off. While this works, it can be a safety issue, so be sure it cannot drop on any common traffic areas.

Covering an entire roof with a waterproof membrane is a practice that seems to have taken hold over the last 15 years or so; this will certainly solve ice damming problems, but it requires a significant investment of cash that would have been better applied to reducing heat loss through better air sealing and additional insulation.

Thermal bridging can be avoided in new builds by ensuring the roof has a high enough pitch and adequate overhang so there is enough room to ventilate and insulate properly. Including high-heeled trusses raises the top deck of the roof to create more space for ample insulation.

Fibrous insulation like cellulose and fiberglass insulation range around R3-4 per inch where spray foam is closer to R6 per inch. The high ecological cost that comes with spray foam stops us from recommending it except for very urgent circumstances and this can be such a case.

For existing homes with limited space over the top of walls, replacing a lower-R value per inch with a higher-value insulation like spray foam  can make the difference. You'd only need to do a strip of maybe a foot or two along the perimeter.

How to eliminating air leakage and heat loss:

There is a lot to learn from something as simple as how frost, snow and ice behave on a roof. Just for fun, have a look at other buildings over the course of the winter, and see the differences. One of the best times for amateur building-forensics is in the fall when there is no snow on roofs and frost forms on cold mornings. Below is an example of something that sticks out like a sore thumb once you understand the significance.

A newly-built school in Wakefield, Quebec, clearly had inconsistent ceiling insulation and significant heat loss. Notice that on the right section of the roof you can see frost lines where the trusses are, and on the center section of the roof the frost is entirely melted. In second image you can see the same roof section has caused the snow to melt and icicles have formed.

If snow melts inconsistently on a roof, then something just isn't right. We are pleased to report that this problem has since been rectified; it was absolutely cringe-worthy to look at on a newly completed building.

Now you know what causes Ice Dams and How to Fix Them, find more Tips for Getting a House Ready for Winter, Why is there ice in my attic, and how to fix it?  and the  Best Energy Saving Tips for Green Homes all in the Ecohome Green Home Building Guide pages.

How to insulate and seal crawl spaces

That should tell you all you need on that topic, and yes, it's best to insulate and protect your crawl space from moisture damage.  Here is our page on what causes ice dams and how to fix them.

Adding gutters to a house shouldn’t cause ice dams, ice damming is caused by snow melting and re-freezing. So it is poorly installed or insufficient insulation that is your likely problem on that front. Have a look over those pages and feel free to ask follow ups if the don’t provide all you need.

Before insulating crawl spaces read here about what causes frost heave and how to prevent it in order to do it safely.

Condensation forms when humid air meets a cold surface, so if there is condensation on a ceiling then there be either thermal bridging - a lack of insulation. Or, if there is a reasonable amount of insulation then it may be that the air in your home may have high relative humidity. This page about condensation will probably help -

This page as well about winter preparations covers the topic of condensation forming on walls in winter, and other humidity-related home issues –

Tips for preparing your house for winter: how to make your house more efficient and save money

For your case specifically, we are more than happy to troubleshoot it with you, there are just a few questions that will help identify the problem –

Does the condensation only form on the exterior edges of your ceiling? That may indicate thermal bridging at the junction where your walls and roof meet. If it is over the entire surface then that could be a lack of insulation.

I don’t see how your heat pumps would be the problem, I am more thinking you need improved ventilation, and likely a dehumidifier. Let us know whatever you can of the above questions and we can take it from there. Another page worth a quick read could be this one about learning how to fix Ice dams on your roof before they cause damage; while you may have sufficient insulation in the eyes of one contractor, unless they did a thorough investigation of your attic it is possible you have ice damming.

Most likely adding a strip of ventilation in the soffit (perforated metal strips used in wood soffits) would probably create enough ventilation to prevent the air from hitting the dew point. We have never been fans of unventilated roofs, as far as we are concerned they are asking for trouble in cold climates, so getting some air though there to dry it out may solve your problem.

Here is out page about why is there frost in attics and how to fix it, for anyone else reading along with similar problems.

A roof leak isn't really a roof leak if it’s leaking in on a sunny spring day as the snow finally starts to thaw. It's more likely a build up of frost and ice in your roof…

Roofs - all homes have them in one form or another, and they're a potential cause of all manner of problems effecting the durability and performance of homes. Roof ventilation…

What is Interstitial Condensation in Walls or Roofs? How to know if it's happening, & how to fix it if it does? We're glad you asked, as it can cause serious & costly damage…

What causes Frost Heave? Preventing frost heaving is down to good foundation design

How to install siding

Drainage planes and air spaces: Siding installation tips so your walls can dry. Siding Installation The walls of your home are an environmental separator. Their job is to keep…

Are skylights an asset or a liability?

Skylights offer natural light in a home but account for a lot of heat loss and can cause problems in cold climates. Here are some tips for selection and installation. So are…

Condensation on windows is a pain in winter and runs down the wall can mean hidden issues in our homes - What causes fogged up windows, how big a problem is it and, most…

A simple checklist for home buyers - visual clues that can help indicate the quality and durability of a home. The following are some things to think about while evaluating a…