What is the best way to install basement insulation with existing framing?

Followup to the question How do you install Larsen Trusses on a home in Minneapolis?

How do I seal the air barrier at the top of the exterior wall?

Hello, The air barrier was installed up to the top of the exterior wall. I wonder how to prevent the air from entering between the top plate of the wall and the OSB r4? The roof trusses are already laid on the top of the wall, so it is difficult to put red tape on the length of the wall.

I have the impression that the air barrier should have been installed over the top plate and the roof trusses installed on top afterward. How to air-seal it at the top of the wall opposite the plate? If I just put red tape on the wall at the top, the outside air could come in through the soffits, then enter between the OSB r4 and the top plate and end up inside the wall. Thank you

When using a house wrap as an exterior air barrier, the best way to bring that inside to create continuity with the ceiling air barrier is to put it between the two top plates. Putting it on top is fairly common, but also somewhat pointless as it will usually get shredded when you slide trusses back and forth to get them placed properly, not to mention ripping it with a hammer when you side nail the trusses to the top plate. So having it under the top plate protects it. But, it sounds like neither of those techniques happened for you.

I think at this point you may be wise to try to use the top plate itself as a part of the air barrier. It has a double top plate? if so, I would run a thick (and likely messy) bead of acoustic seal along the exterior joint between the two top plates, that way you now on the interior if you seal a ceiling air barrier to the top plate you would have continuity.

Does that make sense? I’m not sure where you have the R4 OSB so I’m trying to visualize, and if that doesn’t sound sensible then maybe I’ve misunderstood. if you can't access that joint anymore then you can use the acoustic seal on the interior instead,

Ultimately an air barrier should have a plan to integrate it securely with other components of the air barrier, and in your case it sounds like that wasn’t done. Acoustic seal is horribly messy to work with as it sticks to everything under the sun and is almost impossible to remove, but the bright side is that it works really well for sealing cracks against air leakage.

Hello Emmanuel, Thank you for your suggestion! It does make sense, but unfortunately, in my case, it can't be done because the OSB covers the two plates. I thought I had linked to an image in my initial question. That would've helped you understand where the R4 OSB is!   Here's a link that shows how the construction is built. The difference is that I don't have the outdoor siding installed yet: https://ibb.co/FWdFx87 My comments are in orange. The image originally comes from the Regie du Bâtiment du Québec, and the Tyvek isn't taped to the OSB nor the top plate. But I have a feeling that it should because air could leak between the OSB and the top plate. In my case, since it's R4 OSB, the air could go through the OSB and the R4 and between the R4 and the top plate. Once again, thank you very much for your help!

I can see now what you mean Nicolas. What that diagram shows is about what I thought you meant (shown below). You can see the interior poly membrane on the ceiling taped to the poly on the wall, so in this diagram they are relying on the interior 6-mil polyethylene as the air barrier, which is why there is no tape on the exterior. Which, is also an opportunity missed as you cannot have too many air barriers in a wall assembly. It also speaks a bit to the confusion often in buildings where construction crews aren’t always versed on what does what in a wall, whether it is the interior poly or the exterior weather barrier that is intended as the air barrier. Often you will weather barriers taped like crazy all over but then leave a crucial component - like not taping the top - rendering a lot of the previous work pointless.

I would prefer to see that shown as a well-installed exterior membrane – preferably a peel and stick air barrier – that could be carried between the two top plates and then taped to the ceiling air barrier, then the poly on the wall taped to the ceiling as well. Then there would be a second barrier to further reduce leakage. But that’s all hindsight I guess, and in your position you may well be best at this point to get a few tubes of acoustic seal and make sure the exterior barrier is sealed to the top of the wall with no air allowed through the two top plates (which is where the acoustic seal comes in handy). 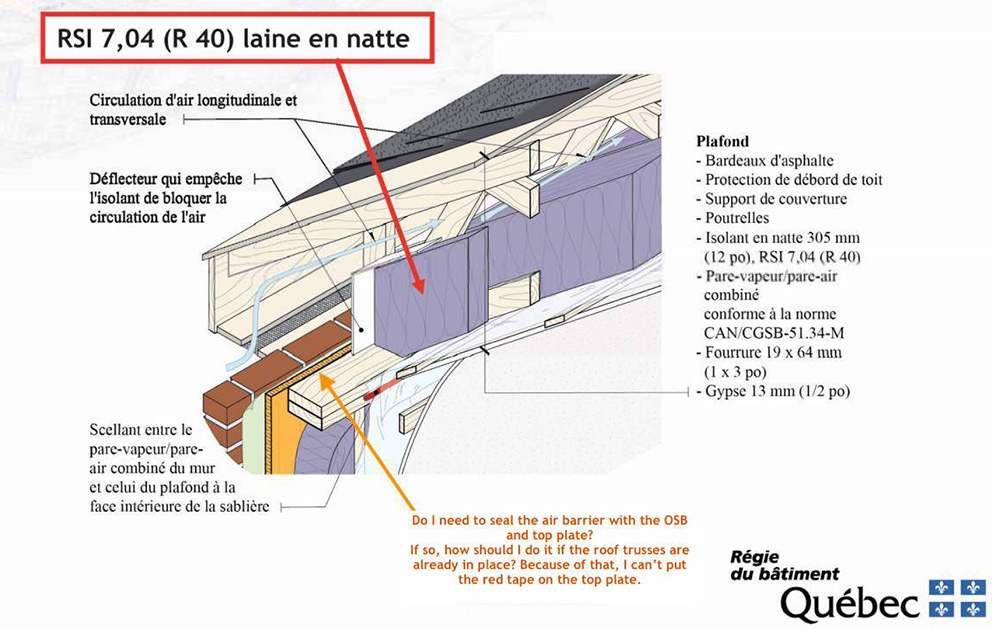 Ah..! Now I understand why the contractor did it that way. As you suggested, I'll go with the acoustic seal.  Thank you again for taking the time to write that detailed answer!

Happy to help Nicolas, hope it works out!

What is the best way to install basement insulation with existing framing?

Followup to the question How do you install Larsen Trusses on a home in Minneapolis?

Where is the correct vapor barrier location in Chicago?

How do I best insulate my century home from the inside?

Should you insulate an A-frame cottage with cathedral ceiling from the exterior or interior?

What is the best practice to insulate a crawl space floor?

Harold Orr introduced us to some of the most essential components of durable and energy efficient homes. Here is a look back at the passive solar heated house he designed that…

A roof leak isn't really a roof leak if it’s leaking in on a sunny spring day as the snow finally starts to thaw. It's more likely a build up of frost and ice in your roof…

When it comes to choosing a building envelope there are many variables to consider: what climate zone you're building in, performance, durability, health, comfort, and of…

Can a house be too airtight? No it cannot. The difference between air barriers and vapour barriers is often confused. Also confused, is which one is more important. The…

3/4 inch OSB sheathing on the interior can be an excellent air barrier and a great vapour barrier as well. There has been a steady evolution in the way we build homes over the…