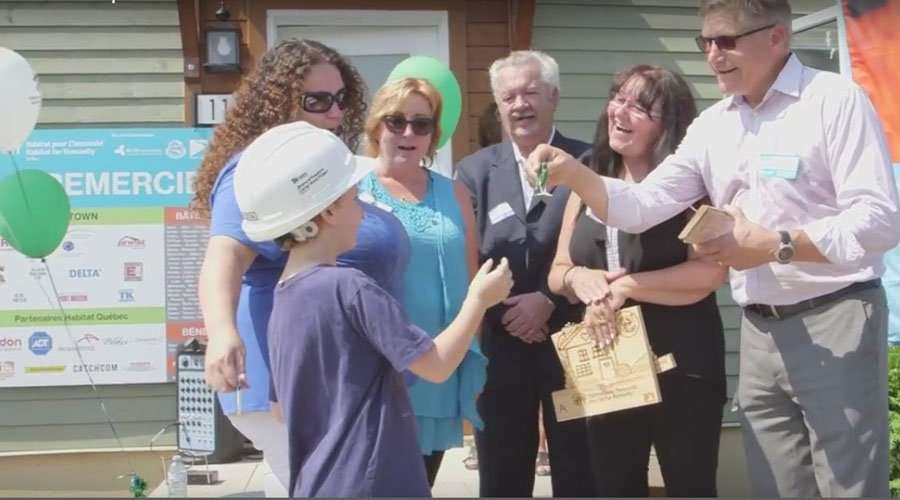 Handing the keys to the new owners of a home built by students completes a long journey for a carpentry school in a small Quebec town.

Educators at the Chateauguay Valley Career Education Centre (CECVC) in Ormstown, QC wanted to offer their students something beyond the standard skills they would get from most schools, so instead of building small sheds or wall sections that would be later disassembled, they decided to build an actual house. Beyond that, they wanted it to hit the highest possible level of LEED certification (Platinum), and finally - give it to a family in need through the charity Habitat for Humanity.

If all that wasn't challenging enough, add to it the fact that Quebec union laws prevent students from working on an actual construction site. Therefore, it had to be prefabricated at the school in a modular design that could be transported by truck to its final location.

The video below is the final episode in a series that documented the entire process, starting with concept and design, through all the construction steps, and finally the delivery and installation. We were honoured to be part of this project and hope that this inspires similar projects at other schools in the future.

Below is a small sampling of images (courtesy of JHCarpentry) that can be found on the blog of teacher John Hodges who documented the project from its inception. And here is episode 1 of the video series, back 4 years ago when this was only going to take 1 year :).

An untold amount of hurdles presented themselves along the way, so congratulations to the entire team at the CVCEC for the vision, determination and patience that was needed to bring this project to fruition.

Handing over the keys to the new owners of a LEED home built by students and donated to Habitat for Humanity. Our House is the story of a small town united around the…

The New Frontiers School Board in Ormstown, Quebec has been documenting the design process of a high performance home that will be built by their students, then donated to…

As they set out to build a LEED Certified house that will be donated to Habitat for Humanity, a very excited group of students and teachers can't wait to break ground. When the…

In collaboration with Habitat for Humanity and the Province of Quebec, the 'Our House' project in Ormstown, Quebec, will see carpentry students building a home targeting LEED…

Build with Strength is partnering with Habitat for Humanity International to supply the concrete for affordable and sustainable housing in 16 locations across the U.S. Due to…

Canada Green Building Council to provide free LEED registration and certification for rebuilding projects in Calgary and Lac-Mégantic. Ottawa, ON – April 15, 2014 – The Canada…

With 135 registrations and 202 certifications between January 1 and April 30, 2015, the Canada Green Building Council calls a strong start to the year in Green Building. Ottawa…

The Wallace Residence, also known as the Earthship Farmstead, was named Outstanding Single Family Home of the Year by the U.S. Green Building Council.   Editors note: This home…