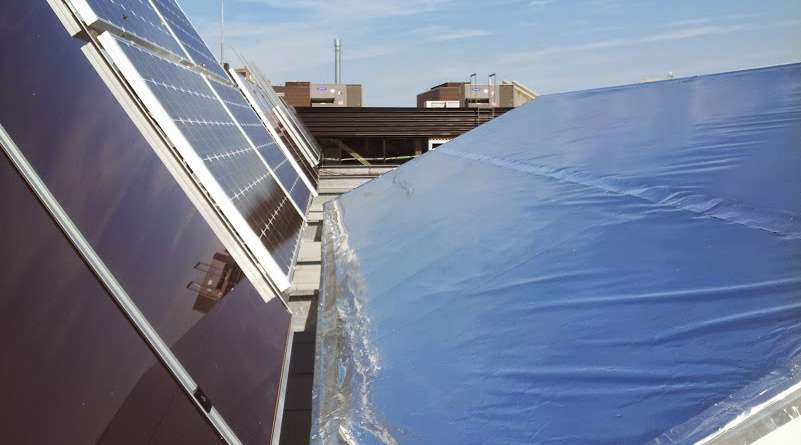 Do I need CSA Approval to Build and Sell Solar Air Heaters?

Can a solar thermal air system be coupled to an HRV for heating incoming fresh air?

The continuing drop in cost for home solar power generation has led to a dramatic increase in the rate of installations, for both residential and commercial use. Increasing the yield through reflection could make that an even more affordable energy supply option.

Most of the advances in solar power production come from increasing the efficiency of the photovoltaic cells; the goal being to increase the watts produced per panel. Joshua M. Pearce, professor of engineering at Michigan Technology University, recently published an article in Green Building Advisor that demonstrates the results of his research on this. Working in conjunction with a study group in Canada, his team has demonstrated that the use of mirrors, or reflectors, to further illuminate the panels could increase their performance by as much as 30%.

This cheap addition to boost power from solar arrays is not yet very widespread. According to Dr. Pearce, this is mainly due to concern on the part of manufacturers and their warranties. The calculation for the performance and longevity of panels is based on the assumptions of very specific energy input. If more light is fed to the panels through a reflector, the temperature variations of the panels themselves will be greater, and the energy output is less predictable. According to Pearce, many manufacturers are unnecessarily concerned about this leading to potential failures.

To counteract what he considers a false conclusion, Pearce and his team have put in place a reliable technique that can predict the effects of reflectors on panels. They use bidirectional reflectance distribution function (BRDF) simulations that calculate how light bounces off an uneven surface, and predict its dispersion. This makes it possible to predict how light will react with all types of reflectors, even imperfect ones since reflectors do not necessarily behave like mirrors.

The model was tested in real-life conditions in Kingston, Ontario and produced impressive results: the efficiency was increased by 45% in a case with poorly-angled panels, and by 18% when tested with a system that had optimally-angled panels. According to Pearce, in most cases with well-placed solar arrays, the energy collected should rise on average by 30% with the inclusion of reflectors.

Discover more about the Tesla Solar Panel special offer, find out more about solar photovoltaic panels here, or if you're looking to build soon, look for inspiration for building a near zero energy home on a budget here, or find out all about Passive House certification & design in North America here - from The EcoHome Green Building Guides...

The S1600 Ecohome prefab kit house comes with a metal roof, as for changing that to a Tesla Solar Roof we couldn’t say for sure right now, that would need to be discussed with the manufacturer. Tesla solar roof tiles will certainly have a more subtle aesthetic, but their value goes beyond that and they may actually be among the cheapest long-term roofing solutions when you consider the long lifespan and the financial advantage of the power they generate. Read more here –

Are Tesla Solar Roofs worth the money?

Orientation is for sure a consideration, but one of the other advantages of the Tesla Solar Roof is that active tiles are only on roof surfaces properly oriented for solar gain, other surfaces have matching but inactive tiles. Read here about Tesla solar roof installations in 2021.

Mounting solar panels on a roof should only be done if you have sufficient space of course, but also if the roof orientation is right for solar exposure. An alternative, as you mention in your question, is a solar tracker mount. We have an article on that very topic, see here –

It can be more expensive on one hand to install a solar panel tracker, but you do save money by purchasing less panels since the tracker keeps the panels pointed directly at the sun so you will get greater yield from less panels. You’ll see the pros and cons in that article, let us know if it doesn’t answer all your questions.

We have seen that people dual wire a house for solar panels so there's no technical problem with it, but to know if you're allowed you'd need to check with your local building authorities to be sure it doesn't violate Building code.

Our two cents - there is for sure losses due to the inverter, but for a load as small as lighting, it may not be worth the added effort to wire it for DC, particularly if you use LED lighting. Since you’re going to install an inverter anyway, it really boils down to the amount of lights you think you’ll need, what that draw is, and how much cost and effort is required to run DC as well.

Please let us know what you finally decide, that's a great question and a great ide, thanks!

Ten things to know that will help you get the best value out of a photovoltaic solar panel system. Diligent research is absolutely essential for any homeowner looking to install…

Ever wonder how solar panels actually work? Here is a great explanation of how sun is converted into electricity, and some resources for getting set up with solar panels in…

Are Tesla solar roofs worth the money? Are there any competitors? Our take on the future of BIPV

BIPV solar roof shingles are poised to take over rooftop solar installations with better durability, pricing and aesthetics announced for the Tesla solar roof - here we look at…

A Toronto Off-grid home 20 years later; how did it fare? How could it be optimized?

The Toronto Healthy House was built in 1996, completely independent of municipal water, sewer and electricity systems. Here is a look back at it, with some tips on optimizing an…

Despite the good intentions, Earthships in cold climates can't work because they contradict the laws of physics. I'm not the Mike Reynolds who invented the Earthship, I'm the…

Do I need CSA Approval to Build and Sell Solar Air Heaters?

Can a solar thermal air system be coupled to an HRV for heating incoming fresh air?