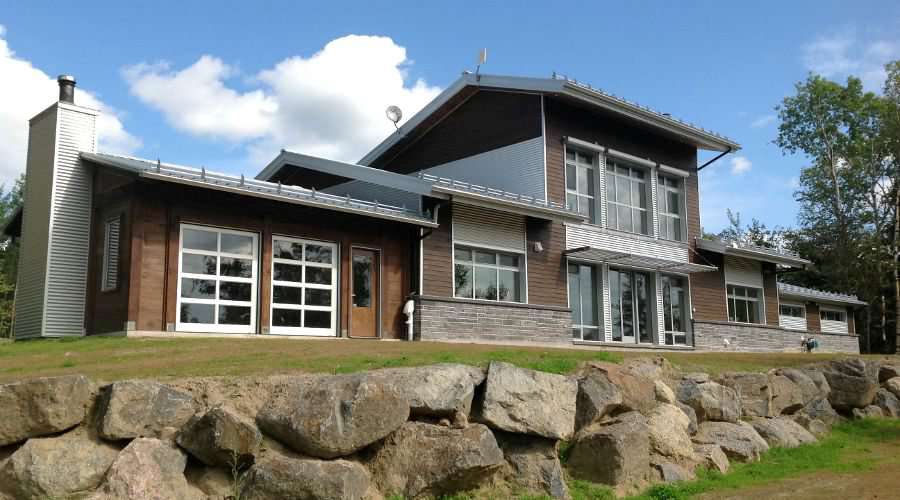 Kenogami House, 2013 House of the year © Alain Hamel for Ecohome

With the help of the Ecohome design team, home builder Alain Hamel builds "The Most Resilient House in North America".

The first house designed under our Passive Solar Index (PSI) program won "Most Resilient House" in the 2013 Green Builder® Home of the Year Awards. The Kenogami House is a living laboratory of high performance design and technology, called "The Most Resilient House in North America" by Alex Wilson, founder of the Resilient Design Institute.

The PSI program is the brainchild of our Energy Efficiency Coordinator Denis Boyer who set out to find the ultimate building envelope for one specific climate. The Northern Quebec climate that he chose (or more accurately was presented with by homeowner Alain Hamel) was by no means an easy one.

PSI is a design service and  home performance recognition program, intended to apply a performance figure to homes indicating their heating requirements. Any home under 50 kWh per square meter per year is recognized, we also have the PSI challenge, where we put it out to the building community to build the first cold climate home heated entirely by the sun, with our help of course.

The Kenogami House is not heated entirely by the sun, as it is located on the edge of where this is even possible, but it came very close. Given that this was first attempted in a very harsh climate, we are happy to say that it will only get easier as we bring it down south a bit where more Canadians live.

A big thanks to Alain Hamel for having the drive and determination to raise the bar on home performance to new levels. With this landmark build behind us, we now present the challenge to all builders to be the first to build a cold climate house that relies exclusively on the sun for its heat. Free to the first builder to successfully meet this challenge.

The following is our story first published on September 6, 2013.

After fire destroyed his house in Lac Kenogami, Quebec, Alain Hamel decided to make the best of this unfortunate situation and pushed the envelope on energy efficiency during the design process of his new home.

Alain enlisted the help of Ecohome (and Quebec counterpart Écohabitation), and together they set their sights on a target at the top end of building performance - Net Zero Energy - which refers to the ability of a building to produce as much energy as it consumes.

Not satisfied with that, they set out to create a building envelope designed specifically for his northern climate, one that could rely exclusively on the sun for its heating needs. Net Zero Energy, meet Net Zero Heat.

Through a rigorous process of design and software energy modelling, Engineer Denis Boyer, Emmanuel Cosgrove (Director of Écohabitation and Ecohome), Architect Lucie Langlois and Alain Hamel (Écohabitation board member) came up with the recipe for the Kenogami House, making it the most well-insulated and resilient house, likely in the world.

According to Engineer Denis Boyer, "You could easily build a home in the average Canadian climate that was so well-insulated you would need air conditioning to keep it cool, even in January. That would be illogical of course, and a waste of money. What we set out to find were the exact design parameters where all the heat required to keep a home at a comfortable temperature would come in through the windows".

While the Kenogami house does need a minor injection of heat at the coldest moments of winter, for the most part on sunny days it produces far more heat than it needs, leading Alain Hamel to begin work on a phase change thermal battery, to avoid overheating and save excess heat for when it is needed.

Modern house building techniques were able to evolve slowly over the last century, coasting along with a seemingly endless supply of cheap fossil fuels, ripe for the picking. A hundred years ago, houses had no insulation, but most had a basement full of coal at the ready to keep them warm. The Kenogami house was designed to sit on a fully insulated slab on grade which adds thermal mass to the equation.

Insulation soon found its way into walls and ceilings, and over the ensuing decades we saw improvements in heat distribution systems and a slight thickening of insulation, to help meet the lackluster performance standards of today's building codes.

According to the scientific community, a century of burning fossil fuels to meet all our needs and desires has led us to the brink of runaway climate change, placing greater strains on our buildings, and emphasizing the need to greatly reduce their energy requirements.

With that reality in mind, the Ecohome team began this design process with an entirely new philosophy. That philosophy was to determine how much heat was available naturally and to design accordingly.

The starting place of this new design principle is to examine the assets and liabilities of a geographical location. Those are in the form of heat requirements (based on specific regional climate data) and the amount of heat energy that could be gained from the sun (SHGC - Solar Heat Gain Coefficient).

With those two factors, Denis Boyer is able to determine exactly what would be required of a building envelope to keep a house warm in its specific climate, relying only on interior loads (appliances, lights and people) and the sun for heat.

So can a house built to Net Zero Heat specs actually stay at 20°C all winter long by itself? No, it cannot. On cloudy days it could easily drop to 19, or even 18°C.

When a building envelope reduces heat loss to the extent that this one does, even the smallest heat gain can have a measurable impact. If you still find yourself a bit chilly in a house such as this, maybe get a cat. A nice fat one can generate about the same amount of heat as a 20 watt light bulb, and that might be all you need.

This is of course an oversimplification of a complicated process, intended only to introduce the concept. A Net Zero Heat building will also require an extremely efficient Heat Recovery Ventilation system (HRV), but any high performance house will need that.

Obviously, the further north you go the harder this is to achieve. With fewer sun hours in the day and colder temperatures to fight off, where Alain Hamel lives in Northern Quebec (marked on the map to the right) is on the far edge of where this is even possible.

Because of his particularly challenging location, Alain's heat strategy goes beyond simple insulation and into the storage of heat. This is achieved passively through placing thermal mass in the path of the sun to capture the day's heat, which is later released as night falls. There's no rocket science here; that simply means he has a polished concrete floor and brick walls where the sun hits.

The more complicated aspect of his heating strategy involves an air-to-water heat pump powered by photovoltaic solar panels that extracts heat from the interior air and transfers it to his water heater, from where it is distributed through his radiant floors. Along with providing air conditioning in summer, this system prevents the home from overheating in winter, yet keeps that heat to distribute later as the air begins to cool.

Building a Net Zero Heat home is not some costly experiment to prove a point; it is a sound financial decision. Yes, the added cost of insulation will be in the thousands of dollars. Coincidentally, similar savings may be realized by not having to install a heat distribution system.

The difference in having a furnace for example, is that you not only pay thousands to buy it, you keep paying thousands upon thousands to run and maintain it. At today's fuel prices Net Zero Heat is arguably cost effective, fast forward to uncertain energy supplies in the future and it could be invaluable.

Learn more about the Kenogami House renewable energy systems and the building philosophy that drove the design process.

This is amazing considering the climate in which it was constructed

Thanks Jeff. He could have insulated more, but frankly to bring it lower in heat consumption in his climate would actually be a waste of energy in the manufacturing of insulation. That's the beauty of software energy modelling, we now have something tangible to base building envelope performance on, so we don't add carbon to the atmosphere chasing unnecessary R value goals. The point all around here is to save energy AND money.

Are those hurricane/tornado shutters? I didn't see any mention of them in the article. Who makes them?