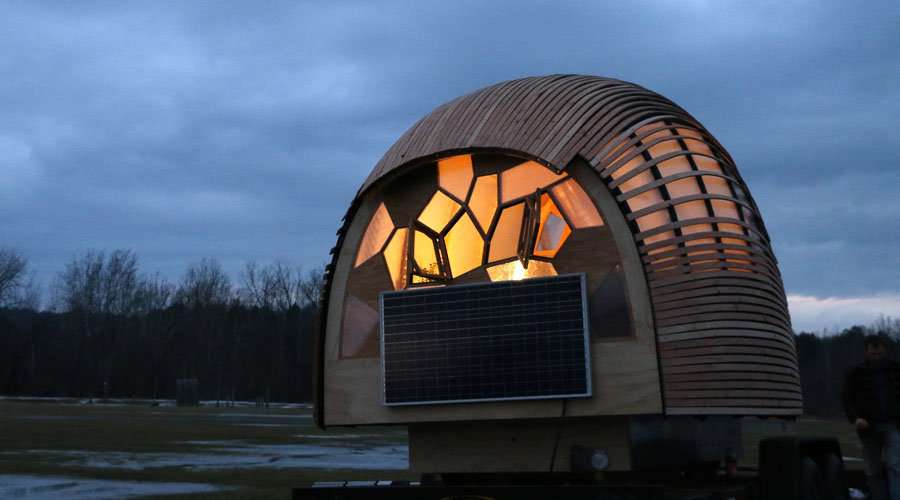 With independent power and water supply, 70 square feet and a set of wheels, Otis is ready to hit the road.

This semester, his class went one better, constructing a 70 square-foot “living system” that can be towed on a standard 5 X 8-foot trailer. The pod-shaped tiny house includes indoor plumbing in the form of a composting toilet, a rainwater collection system, and a single 120-watt solar panel to provide electricity. The class has dubbed the structure OTIS (Optimal Traveling Independent Space).

The class of 16 students challenged itself to design and build a living space with enough room for one person, that could be easily towed behind a typical 4-cylinder vehicle, and could provide its own water and electricity.

Environmental sustainability is the foundation of the college curriculum, and REED students are interested in finding ways to reduce consumption of fossil fuels and leave a smaller ecological footprint. But Brown thinks there is something more at work behind his students’ enthusiasm for the project.

“The appeal of living a more nomadic lifestyle represents a new take on the American Dream, especially among students in this millennial generation,” he said. “Lots of writing on the millennials suggests that our suburban growth model perpetuated over the last 50-60 years is starting to come to and end. They (students) aren’t interested in being tied down with rent or a mortgage right after college. Something about having their own living space which is very low maintenance and very mobile suggests a different set of priorities.”

“It’s got its own solar system to power itself, and a bath and kitchen are independently supplied by rainwater,” said senior Mike Magnotta. “At the end of the day, you just need the environment to sustain yourself. You’re not tied down to a piece of land and be stuck somewhere. You can really go anywhere and do anything.”

Students broke into teams to study and develop water, energy, heat and building envelope systems. Kellin Banks was charged with managing the water systems. “How to turn something that most people don’t want to think about into a valuable resource--that was an interesting challenge,” she said.

Images and video by Eric Hudiburg

A note from Ecohome: We originally came across OTIS on Tiny House Swoon. If you're a Tiny House enthusiast, check them out, you won't be disappointed.

It's nice to hear that you like the site, thanks. We don’t have any products to offer, we are a web resource for learning advance and sustainable building practices but we can offer some insight.

Given the highway limitations in terms of vehicle width, it is difficult to insulate mobile homes well without coughing up a lot of interior space. Because of that, people often choose a wood-framed interior and spray foam. That would provide a high per-inch R value, but the air tightness  an be affected as spray foam is not flexible once it sets, so if your bounce it down the highway, it may not have a very good air barrier, so you might want a separate membrane.

There are two companies we know of that have switched to more environmentally friendly blowing agents, Elastochem and Demilec. And below is a link to the best built tiny house we have come across, as well as a link to all our tiny house pages. That should help you come up with a good design.

Here are some other pages on tiny houses, the best one we've seen used Rockwool insulation and a separate air barrier membrane.

All about tiny houses

When insulating a tiny house on wheels you need to remember that you will be bouncing down the highway with it, so anything in terms of insulation and even air barriers should be chosen and installed with that added stress in mind. So I would avoid things like spray foam, and your suggestion of Rockwool (formerly known as Roxul and technically called mineral wool) insulation is a good one. Here is a page to the best Tiny house we've seen, and it was insulated with Roxul batts, more than we have seen before -

How to build a tiny house in a cold climate

And this page will teach you about the problems with tiny houses, its good to know those as well to avoid problems from the beginning.

The Fincube tiny house is off-grid, portable and enjoys a 360 degree view of the world. The Fincube is a pre-fab multi-purpose dwelling, it's built to operate off-grid, it's…

Tiny House, Big Living, Tiny House Hunters & Tiny House Nation are all big on the affordability of the Tiny home lifestyle - But is that the whole Story? An investigation into…

Are you wondering how to build a Tiny House for living in cold climates? How much insulation does a tiny house need? See plans for the best tiny house on wheels that we've ever…

With free materials found on Craigslist, Joel Allen built his treehouse, The Hemloft, hidden in plain sight on Crown land. Now that he's shared it with the world, it's going to…