A guide to growing edible perennials.

What lawn alternatives are there?

What is the best deck material?

How do you polish a concrete slab to be a finished interior concrete floor?

This type of concrete reduces the carbon emissions by 70%, fuel consumption by 30% and water use by 80%.

Normal concrete production consumes an equal amount of water to solid material, which is necessary for the chemical reaction that causes the binders to react. Solidia concrete instead uses CO² captured from the combustion fumes at the industrial production site, which is then re-injected into the mix. That CO² is sequestered permanently in the material instead of being released into the atmosphere.

The cement reacts with carbon dioxide to form calcium carbonate (CaCo³) and calcium silicate (CaSiO³) which acts to harden the blocks. The reaction occurs in a closed chamber at a moderate temperature (60° C or lower) and at ambient pressure. Solidia’s concrete also hardens in less than 24 hours compared to conventional concrete, which takes several days to sufficiently harden.

The end result is a 70% reduction in the total ecological footprint of conventional concrete, including 60 to 80% less water consumed. And what gives this product a huge advantage in the marketplace is that with lower material production temperatures, the manufacturing costs are actually lower.

Just 30 Solidia Concrete blocks will absorb 22 kg of CO² during the production phase (240 kg of CO² per 1000 kg of cement), equivalent to the absorption of a single tree in one year. (And talking of Trees, if you're more inclined to build or maintain a wooden deck, check out our 10 Tips for Building a Green Wooden Deck here

Don’t get your hopes up yet that you will be able to pour a basement or concrete slab with this; it must be cured in the factory, so its applications will be limited to paver stones and formed blocks.

Solidia Technologies® holds the exclusive rights to license the patent, although Lafarge has signed an agreement with Solidia in 2013 to market the product in North America and Europe. In a recent development, Patio Drummond in Quebec have started production of carbon negative concrete CMU blocks for the North East of Canada and USA - see here. 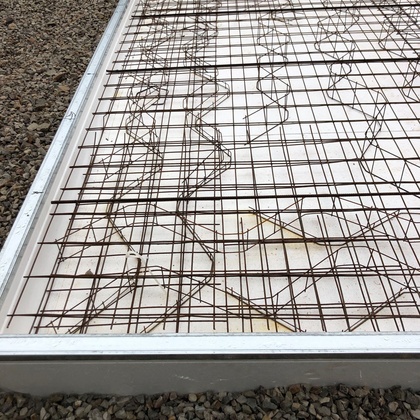 CFI Board and Waterproofing

What is your climate zone? Experiencing tornadoes is a clue, but closer is better. A foil bubble wrap will for sure act as a vapor barrier, but that should only be installed in a cold climate, so I’m assuming you’re a bit to the north.

Foil will reflect some heat, but not usually enough to account for the added cost.

Block foundations in general are best insulated from the exterior to keep them warm, but it doesn’t sound like that is your plan. You need to be careful when insulating the interior of a block foundation or wall, at least in a cold climate. Without insulation, the blocks have been warm all this time, so suddenly being exposed to the freeze / thaw cycle can on occasion cause walls to crack. Concrete block walls are not as strong as poured concrete, since they are only held together by the mortar between blocks.

The Ecohome Network green building directory will help you find reputable green builders and installers, we are currently in the process of launching it so check back soon. For the moment, this page will help you ask the right questions to find a quality installers –

How to find Green Building Professionals

We would agree with not using epoxy finishes. If they are applied before the concrete has sufficiently dried or if the concrete is not well-sealed from the ground it will absorb moisture over time and possibly cause problems, meaning they may start to bubble and flake over time. They will likely have toxins in them as well (though no worse than many other sealants and finishes), so they can also adversely affect interior air quality.

Our choice would be to use silicate sealants, which are effectively a liquid glass you spread over the floor and then burnish into the concrete. They are non-toxic and very durable. There are a few product options that will have different levels of shine as well as durability, see our page on finishing concrete floors with silicate densifiers for more details.

How to create landscaping surfaces that allow for the absorption of storm water. Permeable Pavers or Paving Stones are best for Driveways and Paths Gaining an understanding of…

How to identify and choose plants that are native to your region. Invasive plants are defined as plants from other continents, countries or even other regions of Canada. Humans…

Gabion cage walls can add thermal mass to homes without adding significantly to the carbon footprint of a home like concrete can. Gabion walls are retaining walls built by…

A guide to growing edible perennials.

Whether or not you're interested in edible landscape design, permascaping, or creating a food forest, this list of cold tolerant edible perennials is a great place to start…

The importance and the benefits of creating buildings and landscapes that retain and manage rainwater on site. Stormwater - why it's important to choose permeable surfaces for…

Which are the best bee-friendly & Eco-friendly alternatives to grass lawns in backyards?

Kitchen counter alternatives to pressed wood: composite paper, aluminum, recycled porcelain, glass and quartz. Here is a look at their durability and cost. The most common…

What lawn alternatives are there?

What is the best deck material?

How do you polish a concrete slab to be a finished interior concrete floor?

Posted by Betsy Lund May 20, 2020 Flooring and stairs 1 Responses