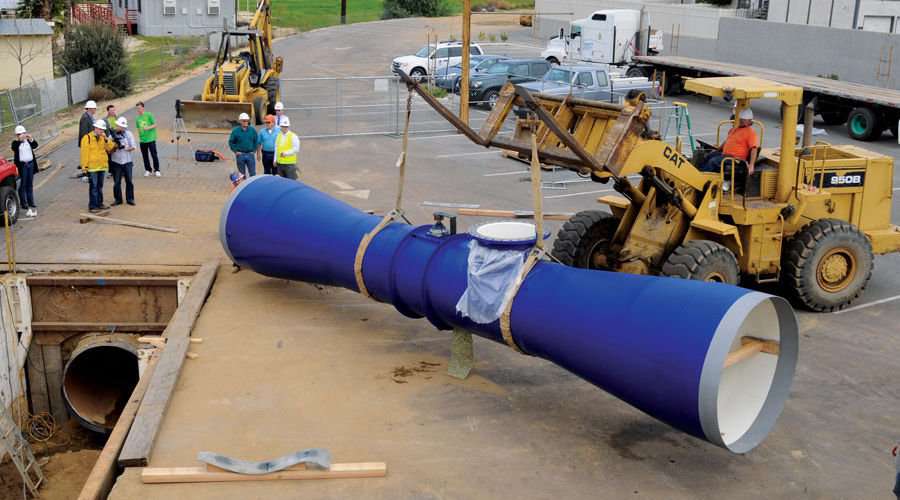 The installation of a LucidPipe power generator via Lucid Energy

Does Hydroloop filter grey water to the extent it can be aerated?

Where can you find a grey water recycling system for our washing machine?

The inside of city water mains has up to this point not been a newsworthy place. With in-pipe power generating turbines, that is now poised to change.

Hydroelectric power generation is definitely renewable but not always 'green' when you consider all the side effects, especially when it comes to large hydroelectric dams. In the quest to find alternative power sources to replace fossil fuels, the energy that can be harnessed from moving water is leading to some impressive technological advances.

The latest is from Lucid Energy, which has developed a pipe section with a 5-blade turbine that can be installed in water mains when replacing old leaking pipes.

As explained on the Lucid Energy website, " The hydrodynamic turbine has been carefully designed and lab-tested to maximize efficiency and power generation without interrupting the flow of water. As velocities increase, power production increases. Due to the lift-based design of LucidPipe, the system generates power across a very wide range of flow conditions, volumes and velocities".

Riverside, California has been a test site for the LucidPipe, where the fourth generation model is in place. According to Kevin Milligan, the water utility's assistant general manager, the turbine has worked "flawlessly" and generates enough power to run 14 miles of city street lights.

The  city of Portland, Oregon is hoping that the generation of power within the water system will alleviate some of the growing costs the city has seen in its delivery of water to residents.This pilot project is slated for completion in June of 2013, and will generate enough power to run 150 homes.

In the past decade water utility costs have gone up 83% in Portland, and an increase of close to 50% is expected over the next 5 years. Revenues should see this system pay for itself in 7 years, after which the proceeds from power sales will belong to the utility.

Though the amount of energy generated from an individual turbine is relatively small, large urban centres have thousands of kilometres of water pipes, much of which is dug up and replaced every year. Read about other innovative Hydroelectric projects.

I am quite sure that the pump that make the pressure in the water network must consume more energy or this is because ther is serious difference of altitude in that network.

It is certainly not free power created from no-where
otherwise we must announce the discovery perpetual movement...

Check out their website, there is a bit more about it. The turbines are gravity fed, and as most cities will have hills, water will go up and down through the system.
Certainly the higher the altitude as you mention would increase the yield, but downhill is downhill, and they are only installed where there is enough pressure through gravity to spin the turbine or there would be no point to it.

The arrival of saltwater home solar batteries on the market for home power storage was an exciting development, but unfortunately not much came from it from what we've seen. There are a lot of good things about them, namely that the power storage component is natural materials (saltwater and cotton) so we were a bit disappointed to hear the company didn’t exist anymore. Here is a page on other home solar batteries to help you choose an alternative.

If you are able to find another manufacturer by chance, please let us know as we would love to be able to point people towards it. Sorry we don’t have better news to report.

With the amount of sun you would get in New Mexico, direct solar thermal collectors make a lot sense, though in your case there is also an argument that can be made for powering a standard water heater (or heat pump water heater for that matter) with your PV panels. That way when there is no requirement for water heating, your system will still produce, as any power collected can either charge batteries or be fed back into the grid for credit. Since you already have a Solar PV system and the infrastructure in place, I think that is certainly worth looking into.

If you do go that route, you could also consider getting a water heater that runs off DC, that way there would be no loss from the inverter.

If you do decide on a thermal solar collector in the end, we do like that Vitosol Solar Thermal Panel from Viessmann. Overheating is the main cause of system failures, and they have developed an excellent solution to that problem.

As for the SANCO2 Heat pump water heater, that is a fantastic piece of equipment, we looked into it a while ago but the price was still a bit prohibitive in our opinion, however, that may just have been Canadian pricing, and it was over a year ago so maybe it has come down. I've contacted the company to see if they offer it with DC, nothing back yet but I will update this when I find out.

Renewable power sources such as sun and wind present challenges for grid operators in being able to consistently meet demand. Tidal and river generators remove that unknown…

Powered by foot, this compact and easy to maneuver machine is an excellent alternative to a normal home washing machine or trip to the dreaded laundromat. A typical washing…

Off grid living blog, part 3: This third post by Craig Anderson outlines the energy systems of his off grid house and explains why he chose them. This is the third piece in a…

Does Hydroloop filter grey water to the extent it can be aerated?